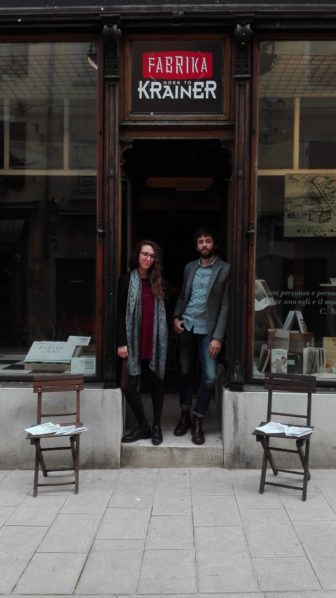 Born from the collaboration among IoDeposito and several research centres, museums and universities worldwide, this multilingual research project on the war diaries involve 7 countries with the aim of investigating the experience of world conflicts with the eyes of human beings (both civilian and soldiers) who directly witnessed the tragic event of war. With crossed perspectives from one side of the front to another, this project underlines the factors common to all human experiences, starting from words and feelings and coming up to diaries and memorialist documents.

Mario Puccini was an intellectual able to deeply influence the fate of history of literature, having an impact on neorealist poetry particularly, as well as a soldier fighting during the First World War. During the Great War, he passed through the whole territory of Friuli Venezia Giulia. His diary on the Great War, entitled Davanti a Trieste (now object of a critical edition which will also turn to be a multimedia version in order to reach the younger ones), sees the writing process as a means of salvation without aesthetic temptations and as a redemption from the senseless violence of war. This diary is both a source of linguistic and literary evolution and an historical memory of the experience of the Great War.

This research wants to offer crossed perspectives on the role of the body within the Great War, by investigating the body as a source of memory of the First World War and by giving life to a collective narration of the conflict, with literary, historical and sociological features.
Bearing reference to the analysis of artistic expressions, memorialist documents, direct sources, the several essays presented in this volume (to be soon published by Lint Editoriale, Trieste) deepen the relationship between the human being and the Great War: the body is seen as both a cognitive instrument and a voice of the memory itself.
25 researchers of various nationalities take part in this research project.

PRESENTATION FOR HIGH SCHOOLS OF THE RESEARCH PROJECT ON THE DIARIES OF MARIO PUCCINI
May 14th 9:00 am / Palazzo Attems Petzenstein (honor hall), Gorizia (Italy)

Launch of the multimedia editions created with the research projects In War Diaries, the diaries of Mario Puccini, Essere corpo and launch of the book trailers

The second edition of the artistic and cultural Festival B#SIDE WAR permeates twelve territories of Friuli Venezia Giulia, Veneto and Istria, with a strong international feature: indeed, it involves contributors coming from 39 different countries. Its main scope is to promote a common and transversal investigation on our shared war past and to examine those links existing between the Great War and the way in which we nowadays perceive the world. Several interpretations will emerge and they will be tied to those historical facts that still question the human experience of the Great War, yet to be completely explored. That conflict was so powerful in its tragedy that it has transmitted itself even after the death of the single human beings and has shaped the cultural identity from generation to generation.
The main themes of the edition: the polarity between sight and hearing in wartime, the sound spectrum and the visual and perspective deceit originated by the conflict. The unifying element, in the language of shapes, will be: the line (horizon, trench, excavated, demarcated).

Revealing the conflict/representing the War – war, curatorship and museum experience

How can we tell a painful war past thanks to museum activities and experiences? How to conserve and transmit our common memory preserving its authenticity? How to explore the “B sides” of the Great War and the inconvenient truth of the Twentieth Century’s conflicts throughout exhibitions, artistic and visual events, and to bring to light all its forgotten contents? What strategies and good practices do enable us to involve the new generations and to pass down to them the memory of the “Short Century”?
Revealing the conflict/Representing the war wants to respond to these many questions.
Thanks to a series of three conferences, numerous curators and museum directors from all over the world will present their experiences in front of the necessity to represent wars and conflicts, and will look all together for good practices to share and learn.
Answers will deal with three main subjects: the planning of the museum experience, starting from new frontiers such as technology; the role of the museum in the territory, with the subsequent entrance of the territory in the museum; the scope of the artistic visual and expository activities in elaborating the trauma of war.